Makigumo is all about materialism, so the first thing I want to write about Comic Con isn’t the experience, meeting people, or anything about the show. The first post will be all about the loot – sweet, sweet loot. I didn’t keep tabs on how much money I spent there, but my haul was modest relative to those of my fellow Tomopop editors. Still, I’m really happy with everything I bought. I tried to go for items that would be interesting aside from being Comic Con exclusives, mainly because they would cost less and you wouldn’t have to wait in line to get them. 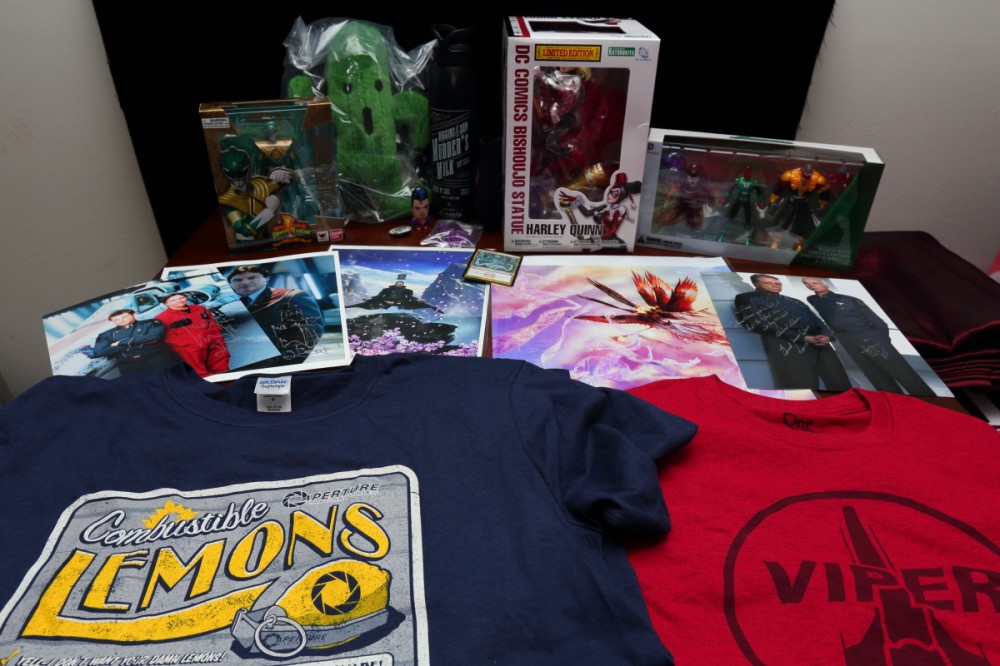 Breaking down the loot: 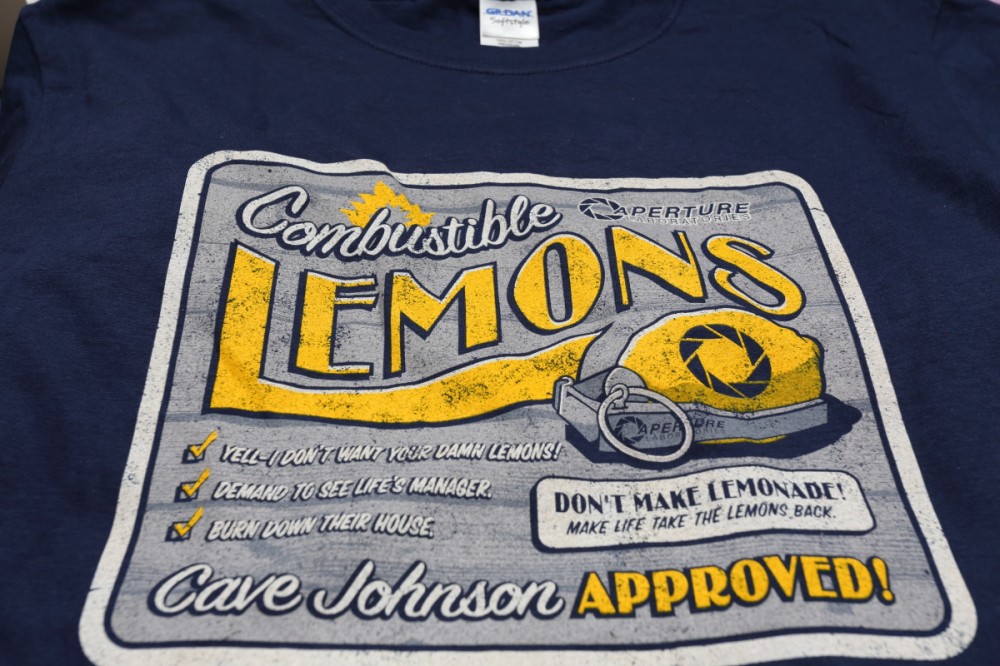 First up is some wisdom from Cave Johnson. If life gives you lemons, don’t make lemonade. You make those lemons combustible, and you fucking throw them back at life. 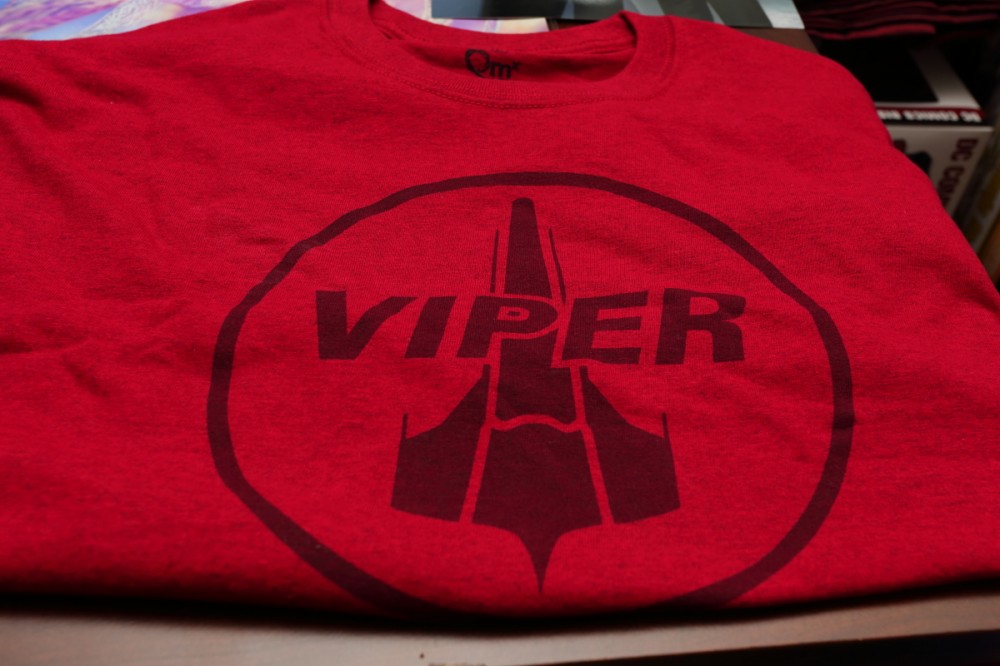 I bought this shirt because I’m a fan of Battlestar Galactica (the reimagined series). I picked it up from the Quantum Mechanix booth as they were doing an autograph signing with Edward James Olmos, and I wanted to make sure I had something for him to sign. It turned out to be unnecessary but the shirt’s pretty cool still. 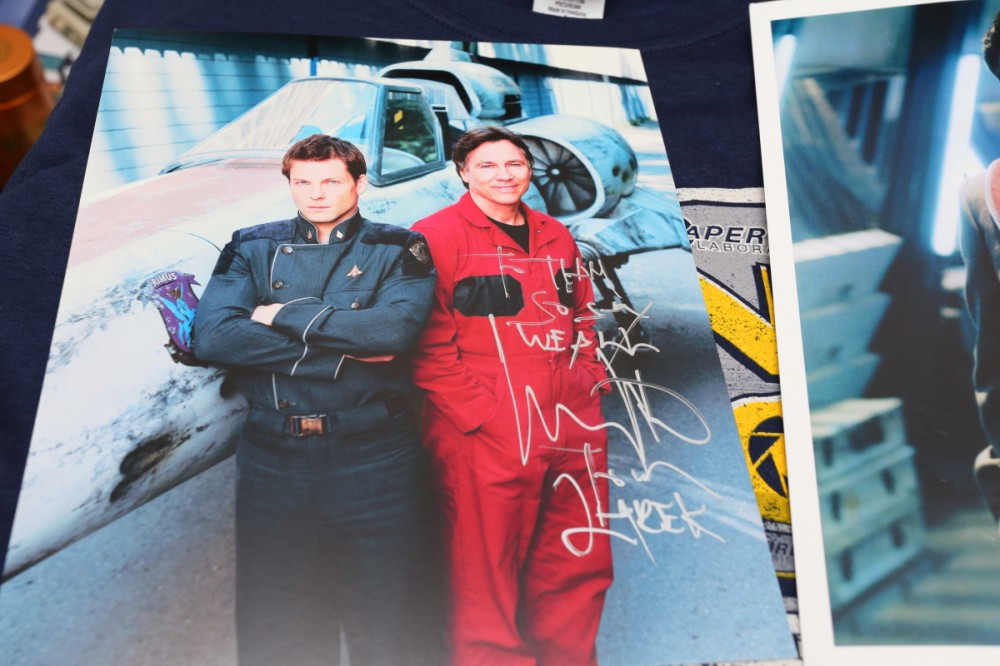 Two Apollos! I met Richard Hatch (Apollo from the original Battlestar Galactica, Tom Zarek from the new one) and was able to chat with him for a while. He said Zarek is his favorite character, and we talked a little bit about what I do for a living. It was really cool to have a celebrity take an interest in me, especially as I was there to do a little hero worship. 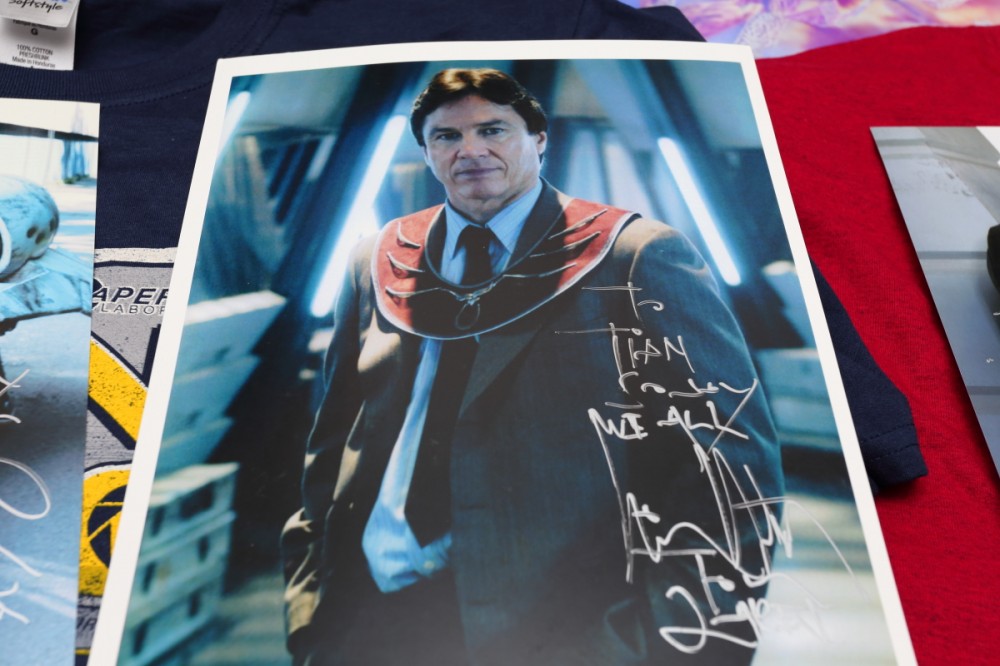 The second photo of Richard Hatch that I got. I think he was wrapping up his autograph signing when I dropped by, but he was nice enough to sign some photos and chat! 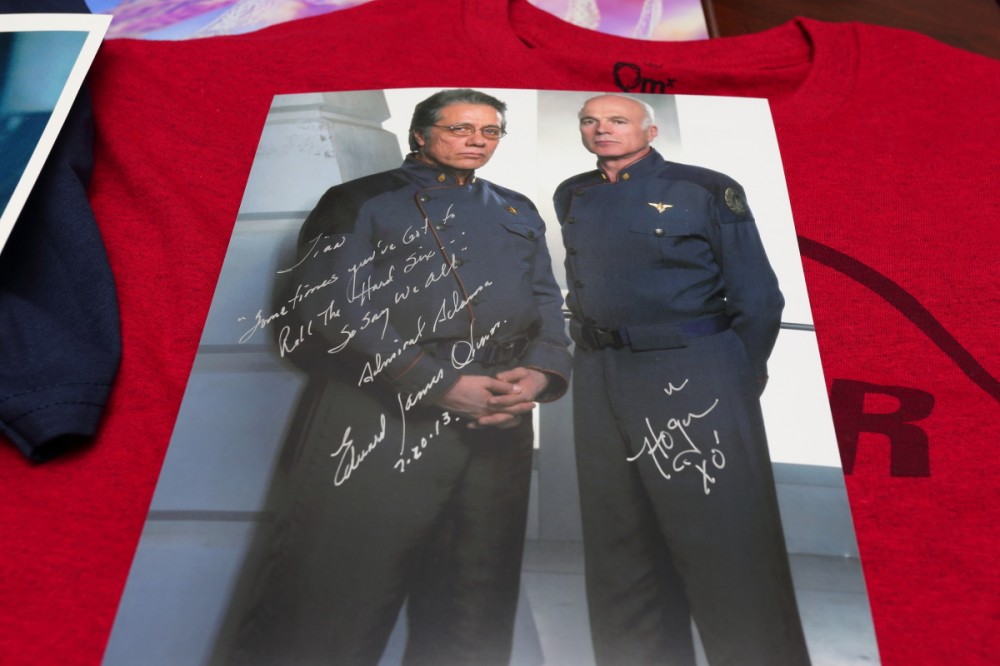 Adama and Tigh! I wouldn’t have it any other way! The photo came pre-signed by Michael Hogan, but I got the autograph from Edward James Olmos in person!! And he included my favorite Adama catch phrase! I was very happy that Mr. Olmos got a kick out of my shirt: 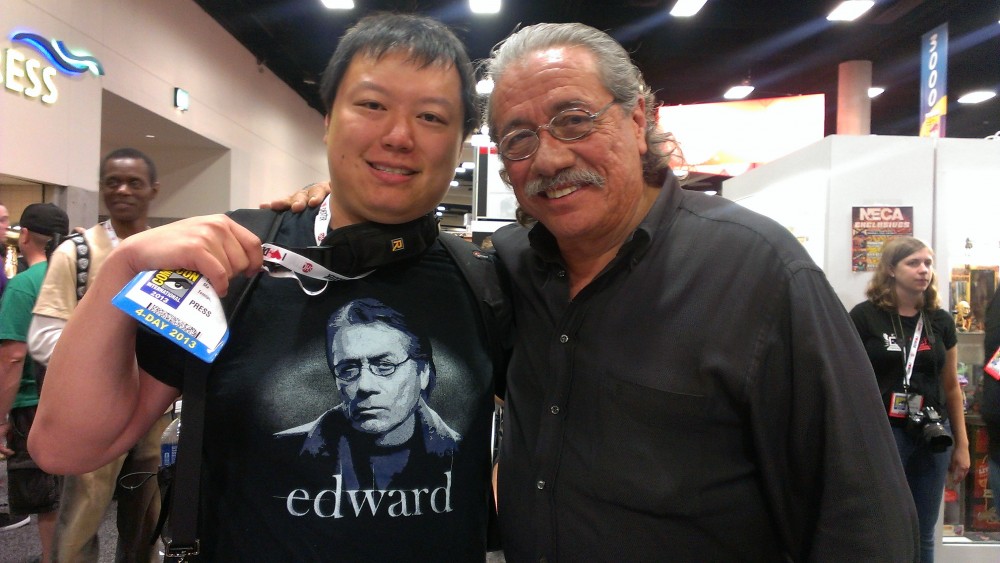 We didn’t have any time to talk as there was a big line (I was first!) behind us, but just meeting the man was an amazing experience. He played one of my favorite TV characters of all time (not to mention his movie appearances) so the whole trip was worth it just to be able to shake his hand.

Off in the quieter corners, I scored myself some art: 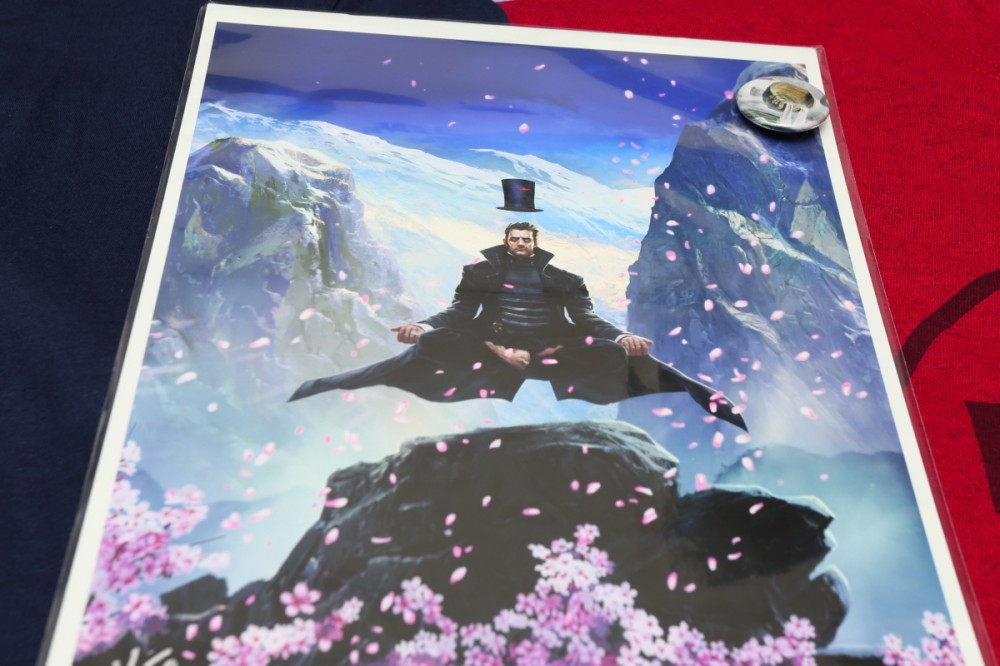 This piece was drawn by Vincent Proce, a fantastically imaginative artist who does a lot of work for Magic: The Gathering. He was the artist behind cards like Tree of Redemption, Drogskol Reaver, and the awesome bowl islands from Zendikar (you can see a little pin of it in the photo). I spoke with him for a little bit about the creative process, his own experiences playing Magic, our favorite art pieces, and the process of illustrating for cards. The print I ended up buying was from a graphic novel cover that he illustrated (didn’t catch the title, sorry). 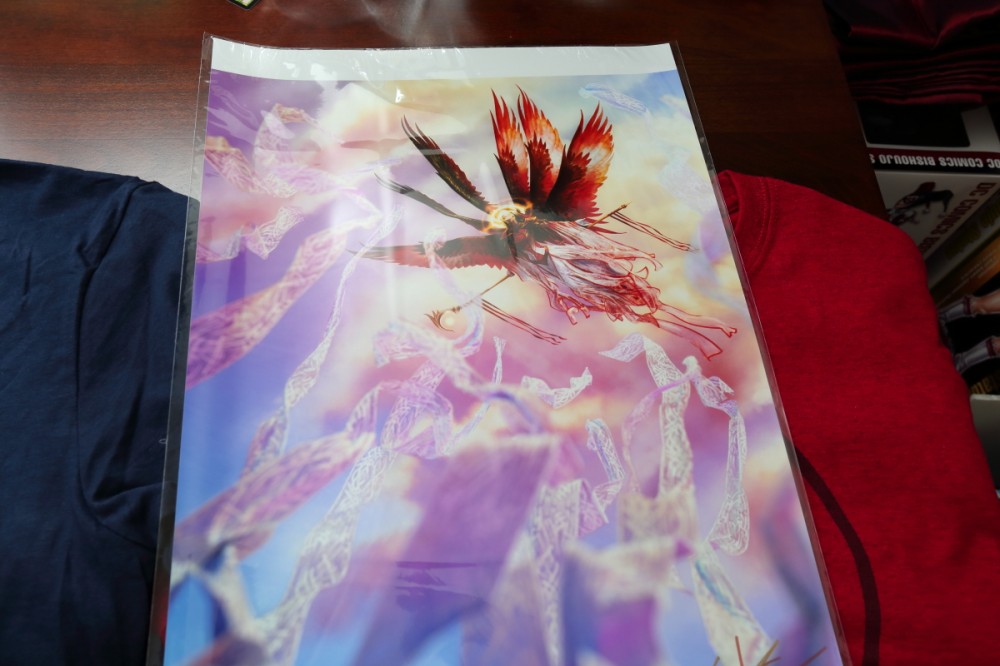 This one was done digitally by Steve Argyle, who I kind of know as the guy who draws the sexy women for Magic. Indeed he’s the man behind Liliana of the Veil and Naya Battlemage. The print is of art featured on a promotional version of Emeria Angel, although the card version lacks certain visual flourishes. The print was already signed by him, but he decided to be nice and signed it again in person. 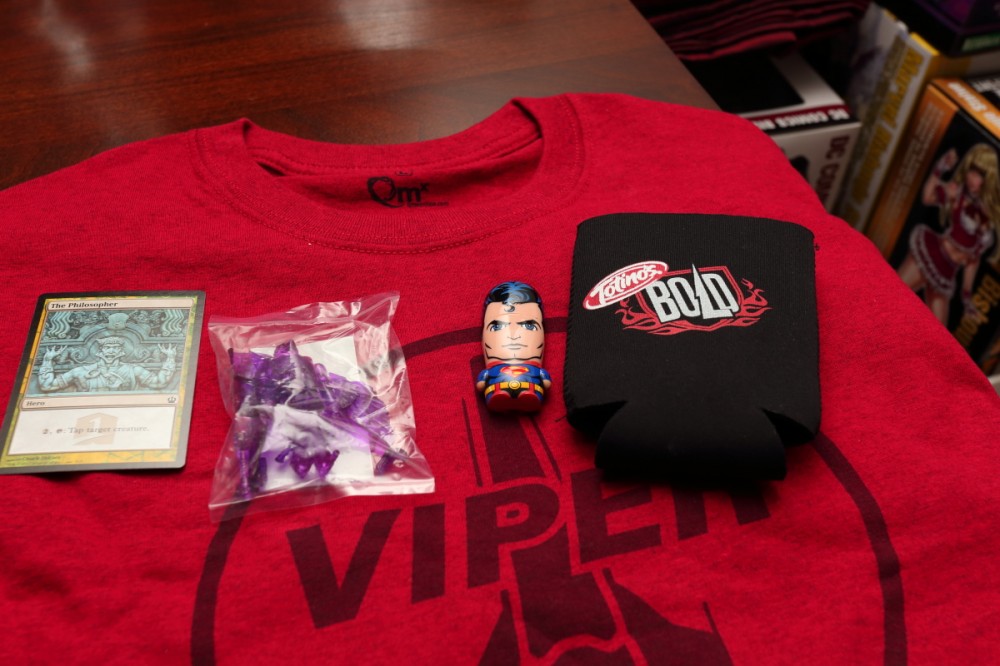 Here are a few small knick-knacks I got from various places. I got the Magic promo card from attending the panel. It was probably my favorite panel, featuring Mark Rosewater and members of the design, development, and creative teams talking about the upcoming set Theros and a few other upcoming products. The purple thing is one of Diamond Select Toys’ Battle Beasts Mini Mates, which is kind of like a Lego minifig except bigger and more elaborate. I got that one from fellow Tomopop Editor Natalie Kipper for “not being an asshole.” Thanks Natalie! The deformed Superman is actually a USB drive I received from the folks at DC Collectibles. They had a sort of room party for the press preview night, and handed out their press kits on these. The last item is a beer koozie, which I may or may not have stolen from a bar. Hey, I really like Totino’s pizza rolls, guys. 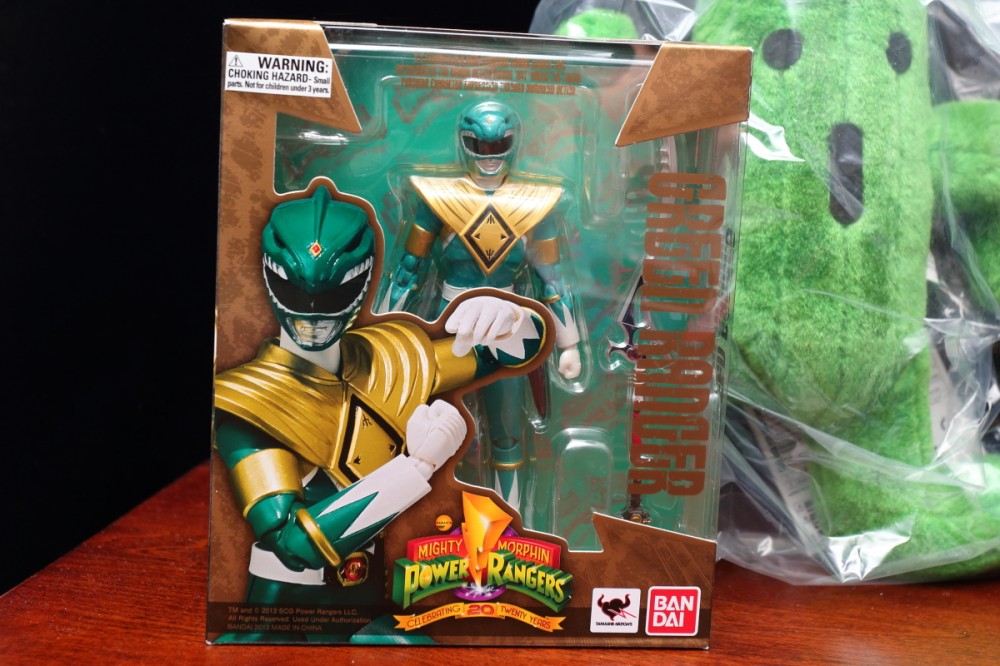 Now we get to some real toys! The S.H. Figuarts Green Ranger isn’t a convention exclusive, but I was able to get it before its official US release. The figure’s been out in Japan for a while, though. I’ve never had a Figuarts figure before so I’m pretty excited about opening up this one. 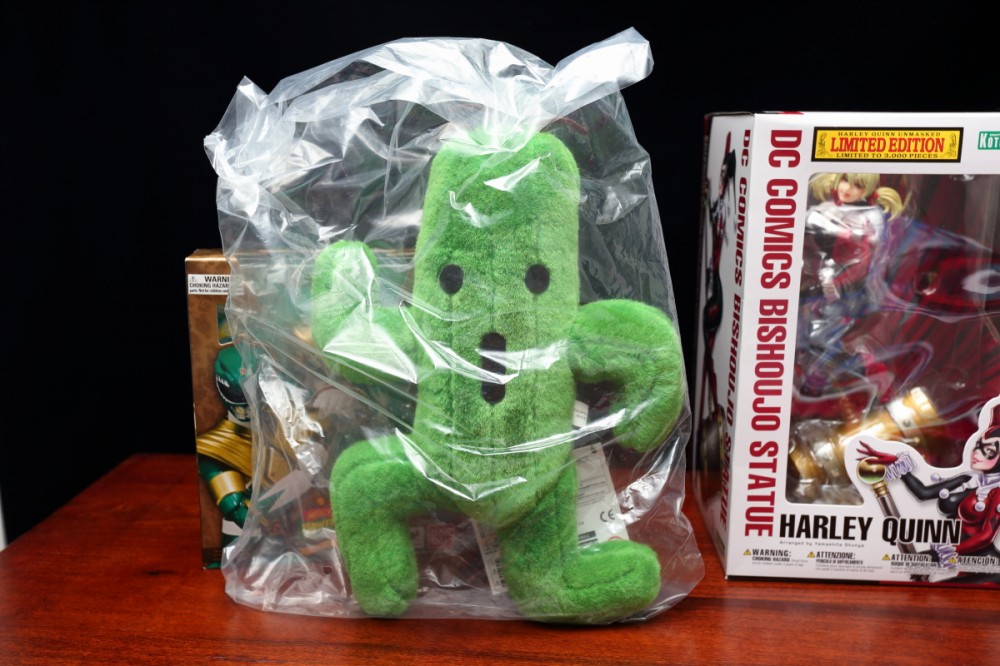 Square-Enix’s booth surprisingly didn’t have a ton of Final Fantasy merchandise. The trading arts figures had sold out, but I managed to nab this plush Cactuar before it sold out.

In terms of items I can use every day, this is definitely my favorite pick-up from Comic Con: a Mudder’s Milk water bottle. It’s actually very well built, with embossing on the text and a nice snap-shut cap. The Hero of Canton would be happy to drink out of this!

Here we see the one item on my must-have list from Comic Con: Kotobukiya’s exclusive Bishoujo Harley Quinn. I have the regular version, but this one is just too awesome with her gold hammer and exposed hair. Harley is one of my favorite Kotobukiya Bishoujo line figures, so I’ll happily display both of them side by side. 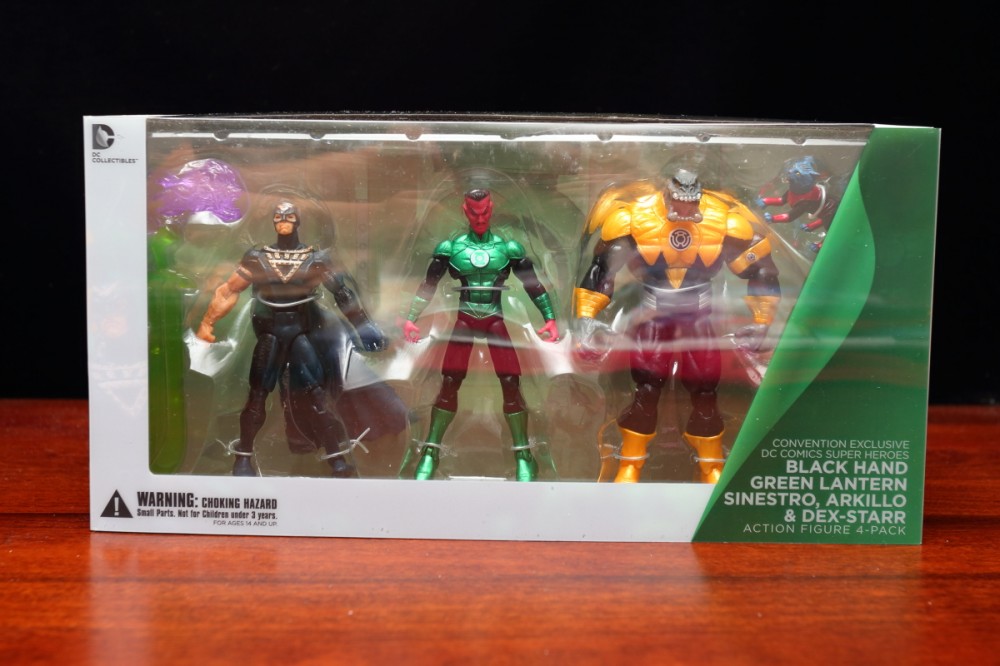 We’ll end on another freebie from DC Collectibles. It was a parting gift as we left their press preview.

That’s it for SDCC loot! I’ll do another post about the sights and sounds, and then probably just a few galleries like I did with ACen. See you next time! 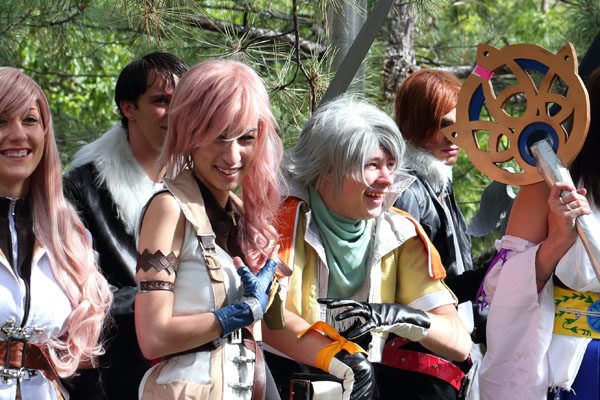 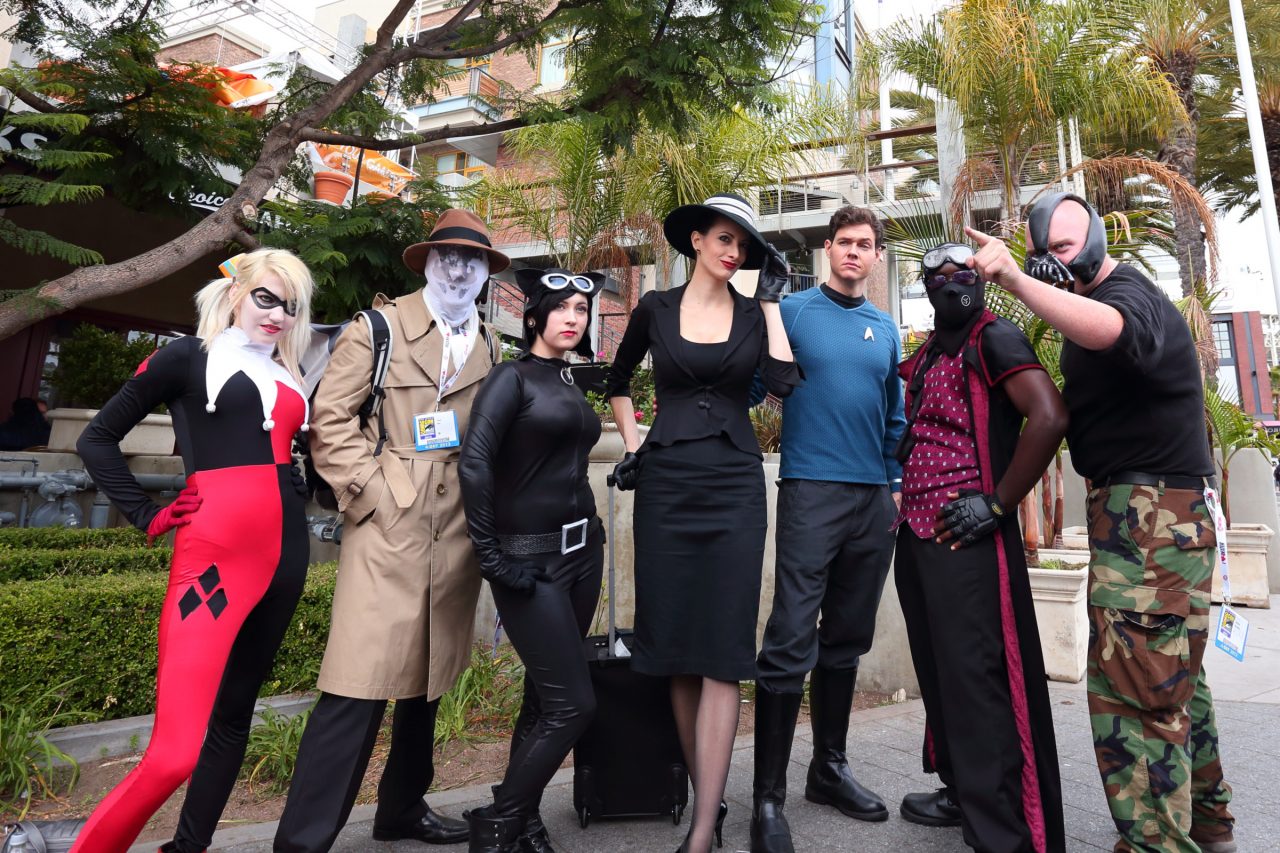 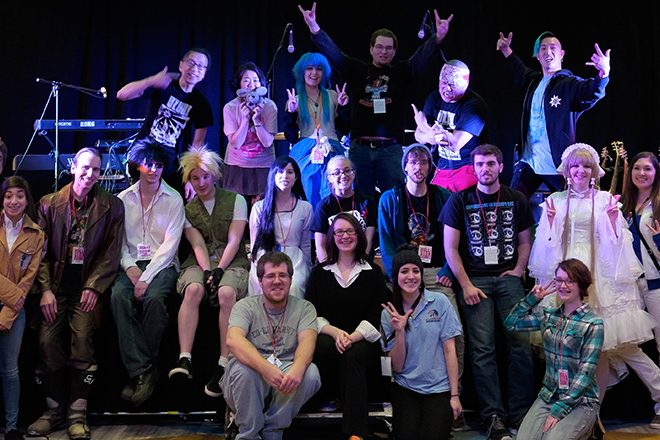